skip to main | skip to sidebar

A blog with tips, tricks and tutorials to help you prepare your CCIE Wireless lab exam.

Just like for IPv4, there are special addresses in IPv6, that you may want to be aware of:

::ffff/96: this is another possible address you may be given. It is called the IPv4-mapped address, because it allows you to represent an IPv6 by using an IPv4 structure. For example, you can use ::fffff:192.0.2.7. As you can see, if your IPv4 address is 192.0.2.7, using an IPv6 address that is just the same with leading ffff makes it very easy for lab work.

You probably do not need to know much about these addresses for the IE wireless exam. You will probably be given a range of IPv6 addresses, and will just be asked to work your wireless gear to support them. Knowing the basic IPv6 address format will help you understand what was the reasoning behind the choice of the IPv6 block given to you: multicast, private address, etc.

In the lab, you can expect to be asked to support Ipv6 connectivity, not to be asked to be an IPv6 guru and configure complex Ipv6 routing parameters, or even IPv6 to Ipv4 translation mechanisms.
If you want to test basic IPv6 connectivity to get a better grasp at how it works, you need a simple router, a basic switch and a laptop. Your windows 7 laptop already supports IPv6 on its interfaces: 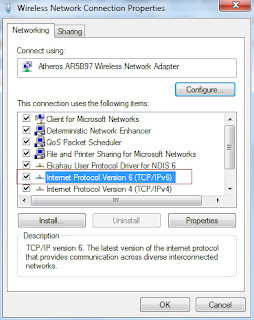 You just need to keep it set to DHCP, and configure an IPv6 IP address and DHCP server on your router, just like in the video. You should see the client get an IPv6 address. The switch is layer 2, so it does not care about the IP address format above the Ethernet layer.
On your router, you need to enable Ipv6:

Depending on your router IOS, the command used to provide the subnet information is prefix-delegation, followed by the subnet (fc00:6::/64 here) and an identifier (64 here), or the command addres-range followed by the subnet (which is the command we use in the demo video).
You do not need to add anything else (the router is going to announce the scope, and announce itself as the gateway), although there are some options you can add. But for wireless, the scope is the bare minimum you need to make it work.

Done, you can now plug your laptop to the switch, in an interface set for VLAN 6, and your laptop should get an IPv6 address from the router.


This is of course on the wired interface. The logic is the same for the wireless interface, except that the laptop would go through an AP and a WLC before getting to the VLAN6 dynamic interface on your controller, then to the switch and the router. The rest... is about wireless...
Posted by Jerome Henry at 7:19 AM 30 comments:

Let's play with this idea: 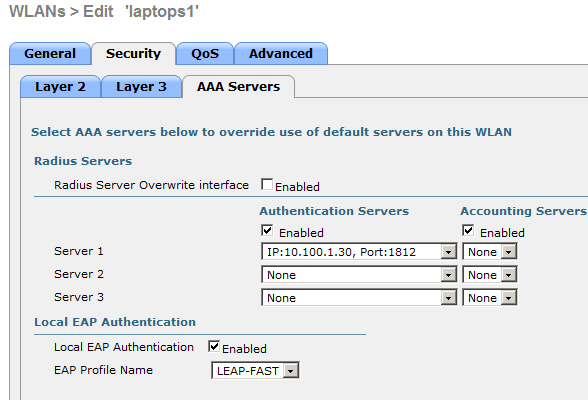 Oops, Network User is NOT checked for 10.100.1.30. This supposedly means that I cannot use this RADIUS server for wireless client authentication (only for management users authentication)... but I called that server from the WLAN, so this global "Network User unchecked" parameter does not matter (thanks Stoef and Anonymous for this comment): because the RADIUS is called directly from the WLAN, the WLAN is going to try to use it anyway. But because Network User is unchecked globally, any other WLAN trying to use the global RADIUS server list (i.e. not having the RADIUS called directly from the WLAN) is going to skip that one RADIUS.
Things would be different if the RADIUS was disabled:

In this case (regardless of Network User being checked or not), I may be calling 10.100.1.30 from the WLAN, but the RADIUS is disabled, and cannot be used, and will be ignored.
Okay, so my controller is going to revert to plan 2, try to use any RADIUS server configured for Network User authentication in Security > AAA > RADIUS > Authentication.
Cool, there is one there (172.29.129.156), matching my criteria (Network User is checked, and the RADIUS server is enabled).
So, my controller is going to use it... or is it? If I look into Management > SNMP > Trap Logs:

A lot of "LOCAL_AUTH" stuff is happening here, I am definitely using the controller local EAP.
Would have this happened anyway, even with a RADIUS server?
Nope, as soon as I re-enable my RADIUS server: